Hi. My name is Melissa Ellis and I am a recovering sugar addict.

Today marks TWO WEEKS since I cut WAY BACK on sugar. To say I’ve cut it out completely would be a lie seeing as how I cook for a family of 5 and almost EVERYTHING has some form of sugar in it–dressings, mayo–or turns into sugars, like pastas or breads. However, my journey consists of cutting out my 1-2 Dr. Peppers a day and my 2-4 bowls–yes, bowls (no less than 20 oz. each)–of vanilla lattes. These drinks, I lived off of. I skipped lunches and breakfasts because I was full on lattes. I cut those drinks out completely, which means I inadvertently cut out caffeine COMPLETELY.

It has not been easy. In fact, I’ve been in the 7th level of hell a few times over (Easter, for instance). BUT, what I have experienced has been absolutely eye-opening.

I had my first taste of sugar as an infant. No one put it in my bottle or anything, but my pacifier was dipped in sodas or sweet tea once in a while and I developed a strong taste for the stuff. As a child, I often drank coke, and by the time I was a teen I could wipe out a box of Mello Yello in about 2 days flat. Weight gain or diabetes wasn’t much of a concern of mine because by the time I graduated at 5’3”, I weighed 89 lbs. No joke. I even took a protein shake regimen during prom season so I could fill out my prom dress a little bit better—with not much success. I made it to 92 lbs., but the weigh fell off of me shortly after prom. My freshmen 15 made me look normal and by the time I was married, I was 120 lbs. Honestly, it was the best I had ever looked. I continued to suck down sodas like it was my last supper and at this point, I had added at least 1 20oz. latte to my daily diet.

Then came the kids.

I reached a healthy 155lbs at the end of both of my first two pregnancies and both times dropped down to 125 lbs. afterward. By the time Ethan, my middle son, was a toddler, I was hitting the gym daily to keep in shape, because

metabolism eventually bails on you…but I would show up every morning doubled fisted with TWO Venti Vanilla lattes for the workout. I’d drink one and finish it during my 40 minute stint on the elliptical, and then start on the
other while doing weights. After my sauna and shower at the gym, ready to start my day, I’d swing by Starbucks for ANOTHER Venti Vanilla Latte. If I was in town for errands or school pick up, I would swing by yet again for a fourth! I was literally dragging tail in life. Being a parent is exhausting, add to that late night and weekend jobs in music and at a tv studio (till 3am) and about 4 sugar crashes within a day, you had one very tired girl. I was only 30, but I felt 40!

While studying counseling, I learned that divorce is the second highest stressful event that a human being can experience next to the death of a spouse or child. I was severely depressed during mine and through the whole ordeal were my favorite comfort foods: lattes, Dr. Peppers, chips, and cheetos. My weight spiked to 155 lbs. and this time I wasn’t pregnant; I was miserable. And, of course, stress is bad to our bodies. Most of the weight went straight to my gut, leading people to question if I was pregnant.

“No, I’m not pregnant. I’m a single mom. Nobody has time for that crap if they’re doing the single-mom thing right.”

Still, Matt (my drummer) fell in love with this frumpy, tired woman and we tied the knot in 2013. We started a family at 155 lbs. The morning I went in to labor, the hospital weighed me at a solid 200 lbs. Never in my life have I weighed so much… and Liam was a preemie, born almost a full 2 months too early.

I dropped some of the weight, but after giving birth to Liam, I was diagnosed with was is referred to as Postpartum Hypothyroidism. Basically, this means I got fat in the worst area possible (belly), became even MORE depressed (because I had already been diagnosed with that ages ago), stressed (another belly weight factor) sluggish, my hair thinned out really bad, and I was always tired which made me appear lazy. I hated it, but it prompted me to start a healthier way of eating. I began making meals with only organic foods and substituting a lot of things like butters & oils with unrefined virgin coconut oil.

Roughly about 18 months after Liam’s birth, I was no longer diagnosed with it and my thyroid began doing what it

was told again. This is a good thing, but I had already put on so much weight that it affected me horribly. I was easily winded with just pacing and talking on the phone (which is crazy for me because I’m a pacer AND a talker). I suffered from such horrible indigestion and heartburn that I would literally make myself throw up if medicine didn’t work. My feet were always hurting which made working out and playing music (my job) extremely painful—and to make matters worse, I lost only 10 lbs from February to September after enduring that horrible pain in my feet. I increased my workout threshold and got suckered into trying several of the many weight-loss systems like Body by Vi, Advocare, and phentermine to get beyond the plateau, and even dropped my calorie intake to 1200-1500 but nothing worked. And yes, through all of this I was still regularly consuming my lattes and sodas.

I’ve been extremely embarrassed to be in public because of my weight and my desire to hide away at my house is completely unrealistic seeing as I have 3 very active boys, an active husband, and I play music for a living. I’m on stage. I’m not only in public, I’m in a freaking spotlight! It’s emotionally, physically, and spiritually painful to be in fear of the world seeing you. I even spent a few Sundays out of church because the question of pregnancy came up several times. I would often have loved ones point out other heavy women to show how well they carry their weight, but my body was different than theirs… I would wear clothes big enough to “conceal” my midsection, but they would hang SIZES too large for my arms and breasts. My stomach required an XL, whereas the rest of my torso needed a medium. My go-to was usually something flowy or empire-waist, but that would only illicit more of the same questions: “Are you pregnant?” and “When are you due?”

**For the record, this blog in no way advocates the acceptance of this question to women. If you ever ask any woman this question—even if she is clearly about to pop at 9 months along—you are deemed offensive and very stupid by the majority of women. Period. If she’s a stranger, it’s none of your business. If you know her, she would’ve already told you if she wanted you to know. Don’t EVER ask this question. Keep your mouth shut.

My weight has even affected my work load! It’s hard enough being a female in a field/career dominated by men but more times than I’d rather admit, I’m passed up for bookings because I’m not as thin or “sexy”. But hey! I’ve got a great personality! 😉

Sugar. My lattes and Dr. Peppers. Gone. Junk food and chocolates have never been much of an issue for me. My 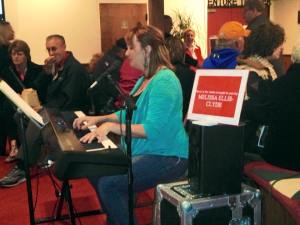 foods have already been pretty healthy already for years. But my sodas and coffees were literally KILLING ME!

In only two weeks, I have already seen some MAJOR changes in me. I knew it would be tough, so I decided to take a two week break from the treadmill—therefore, everything I list is only from eliminating sodas and lattes from my diet. No junk food snacking either.

I’m still overweight and I’m still working on changing that, but I sense the change I’ve needed. This week, I’m adding in regular workouts to help propel this weight loss. And I don’t anticipate keeping sodas and lattes out of my diet forever. My goal is to make it a month without it, then when a special occasion arises (trip to the movies or a girls’ coffee morning with my sisters), I’ll indulge a little.

If you’re considering this new lifestyle or suffer from the same things I’ve mentioned, watch “FED UP” on Netflix. I think you’ll be surprised to learn the horrible and addictive effects of sugar. It’s our legalized version of cocaine.

Thanks for all the support through this. I hope to be in better shape soon for myself, my family, and for everyone who comes out to see me play music. You deserve someone with energy.